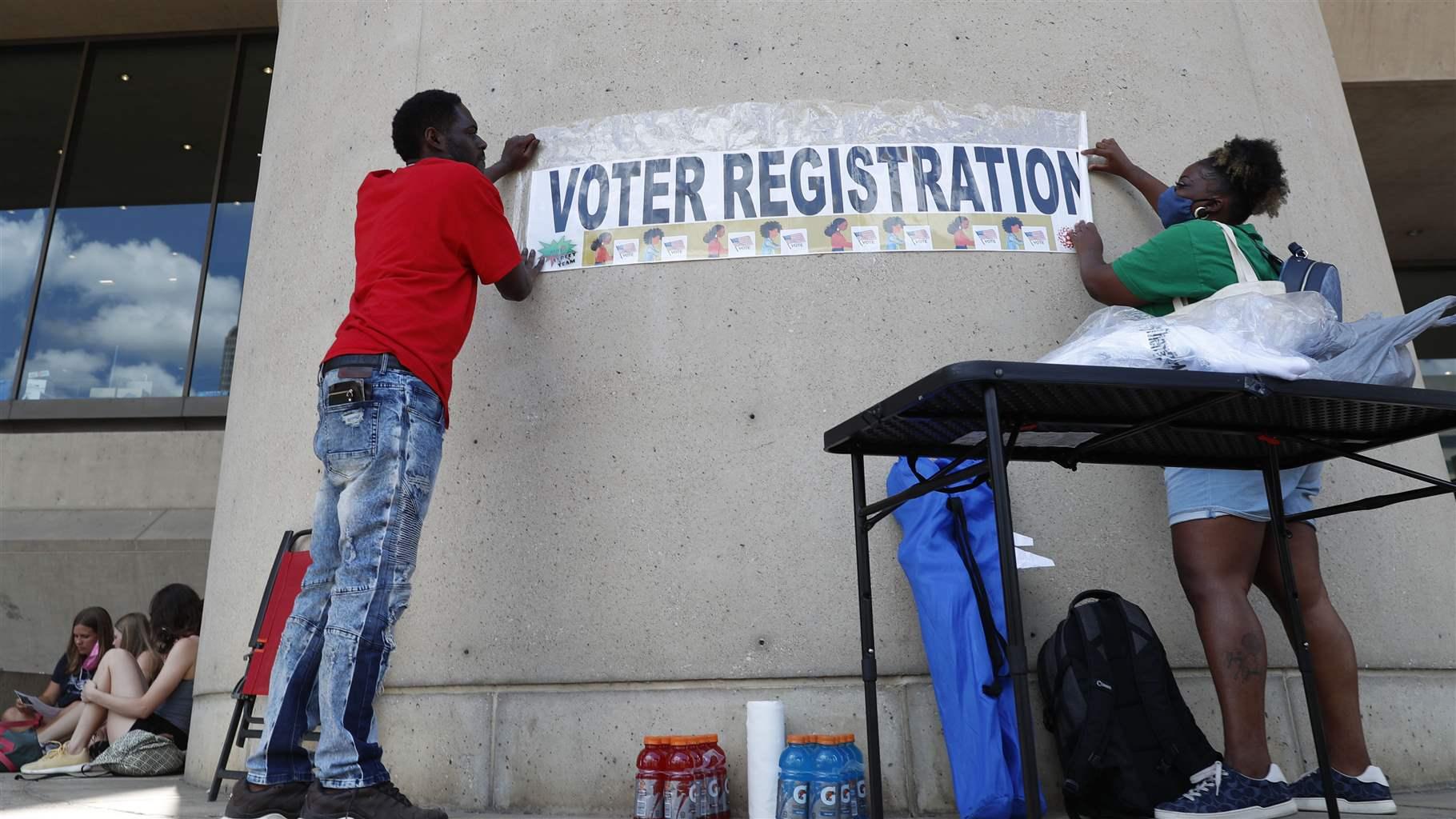 It’s county fair season across Kansas, but among the community group booths lined up alongside food vendors and livestock competitors, there is a noticeable absence: League of Women Voters volunteers with clipboards registering new voters.

“It’s like asking our League members to cut off an arm or leg,” said Jacqueline Lightcap, co-president of the group, which filed a lawsuit against top state officials June 1 with three other local voting rights groups. “It’s second nature. It’s part of what we do.”

Among the deluge of new voting restrictions passed by GOP lawmakers across the country this year are laws in three states that target nonprofit groups’ voter registration efforts. While Republican lawmakers and state officials say these measures are aimed at securing the election system, the measures threaten to criminalize or undermine longstanding voter outreach programs.

New laws in Florida, Kansas and Ohio have sent shockwaves through voting rights groups, which fear these measures may turn their volunteers into felons or may subject them to substantial fines just because they help register new voters.

“All of these laws are a backlash for folks participating in the presidential election,” said Michelle Kanter Cohen, policy director and senior counsel for the Fair Elections Center, a Washington, D.C.-based voting rights organization. “There was huge turnout among new voters, young voters, voters of color—those who use these organizations to register to vote.”

The Kansas law, which went into effect in July, made it a felony for people to engage in conduct that “gives the appearance of being an election official” or “that would cause another person to believe a person engaging in such conduct is an election official.”

For groups such as the League of Women Voters that have conducted voter registration drives at farmers markets, naturalization ceremonies and street fairs, this broad language could open volunteers to criminal charges if there is a misunderstanding.

“Anything that we do can be perceived as similar to an election official,” Lightcap said. “We didn’t want to risk anybody inadvertently getting in trouble for things we’ve been doing for many, many years.”

Republican state Reps. Blake Carpenter and Emil Bergquist, chair and vice chair of the committee that drafted the bill, did not respond to requests for comment.

Tennessee Made It Harder to Register Voters. Activists Consider What’s Next.


Douglas County District Attorney Suzanne Valdez, a Democrat who serves the Lawrence area, will not prosecute people under the new law, telling Stateline the measure is too subjective and has chilled essential voter registration efforts.

“You could have a 75-year-old woman who had no criminal history and just trying to do a civic duty in a nonpartisan way being charged with a felony,” she said. “I’m just shocked by all of it. I don’t see how someone who is trying to get people to vote and be part of the democratic process is in any way a threat to public safety in our community.”

While the practice is uncommon, there have been recent examples of prosecutors ignoring laws with which they disagree. In Kansas, Reno County District Attorney Keith Schroeder, a Republican, said last year that he would not enforce executive orders related to COVID-19. Marilyn Mosby, state’s attorney for Baltimore and a Democrat, said she would no longer prosecute marijuana infractions or certain other minor crimes, a stance shared by District Attorney Rachael Rollins of Suffolk County, Massachusetts. Rollins is also a Democrat.

Kansas Attorney General Derek Schmidt, a Republican, said suspected crimes related to the new law would still be prosecuted by his office, including in Douglas County, despite Valdez’s objections.

“Citizens throughout our state deserve assurance that state election-integrity laws will be enforced and election crimes, like all other crimes, will be prosecuted when warranted by the evidence,” Schmidt said in a statement to Stateline. Schmidt, who also is running for governor, is defending the state in the court case against the new election law.

In Ohio, a new law against election administration money from private groups has led to widespread confusion among voting rights groups and county election officials who fear it could halt voter registration drives in the Buckeye State.

Republican lawmakers this year inserted language into the state’s budget that come October will permanently ban local election offices from accepting money from outside groups. The punishment for violating this provision is unclear. The Center for Tech and Civic Life, a nonprofit backed by Facebook CEO Mark Zuckerberg, gave out more than $350 million to 2,500 local election offices last year to help shore up perpetual resource shortages.

However, the Ohio provision was written so broadly, observers say, that voting rights advocates and some local election officials have interpreted it as banning any collaboration on voter registration, voter education or poll worker recruitment between local election offices and nongovernment groups.

“The League of Women Voters of Ohio works with counties across the state on voter education, poll worker recruitment and many other projects that promote the common good,” said Jen Miller, the group’s executive director, in an interview. “We are concerned this vague language could hamper our ability to serve all Ohio voters.”

Rob Nichols, a spokesperson for Ohio Republican Secretary of State Frank LaRose, said the law isn’t intended to criminalize either voter registration or get-out-the-vote activities. Republican state Sen. Theresa Gavarone said in an emailed statement that she does not know a single member of the General Assembly who wishes to block routine voter outreach by any third-party organizations.


But these statements have left election officials puzzled.

“It’s clear as mud,” said Aaron Ockerman, executive director of the Ohio Association of Election Officials, a bipartisan group that represents county election boards. “The confusion is rampant across the board right now.”

Ockerman hopes LaRose will issue a public advisory or legal directive that is more binding than a public statement to clear up concerns. Nichols did not say whether LaRose would do this by the time the law goes into effect in the fall.

Democratic state Rep. Bride Rose Sweeney has introduced legislation that would repeal the budget language. Inserting it into the budget at the last minute without public debate was absurd and dangerous, she argued.

“Why would we stop public-private partnerships?” she said. “It makes no sense. It’s so irrational. It can only be strategic to make sure certain types of people aren’t voting. It’s nefarious.”

“That’s basically forcing the groups to undermine themselves when they make every effort to collect and return applications on time,” said Cohen of the Fair Elections Center. Her group and the Southern Poverty Law Center, a national civil rights organization, filed a lawsuit on behalf of two local voting rights groups against the state in U.S. District Court in Tallahassee.

“It just seems to make it harder to get trust with voters and less likely voters will decide to register through a community organization,” she added. Republican state Sen. Dennis Baxley, the bill’s sponsor, did not respond to requests for comment.

After the nonprofit Tennessee Black Voter Project registered nearly 90,000 voters before the 2018 midterm elections, the Republican-led legislature passed a measure in 2019 to fine voter registration groups up to $10,000 if they submitted incomplete or inaccurate forms. The law also threatened additional criminal charges.

Organizers of the Tennessee voter registration effort felt the law added egregious barriers that disrupted the operations of a new organization trying to get its footing in the community.

“We weren’t sure how we were going to navigate the hurdles without getting tripped up,” said Charlane Oliver, co-founder of the Equity Alliance, which helped lead the unprecedented registration effort three years ago. “It was stressful. We can organize our way to get as many people to the ballot box to make sure people are registered, but in one fell swoop these racist suppression laws can dismantle that work.”

Oliver tells groups in other states that feel targeted for their voter registration efforts to use every tool to fight the measures.

“You can put these hurdles up if you want to, but we’re going to figure it out,” she said. “That’s what our community has always had to do since we came over here on slave ships. We’ve been resilient. Things like that don’t scare us, don’t intimidate us. We’re going to find another way to survive in America.”