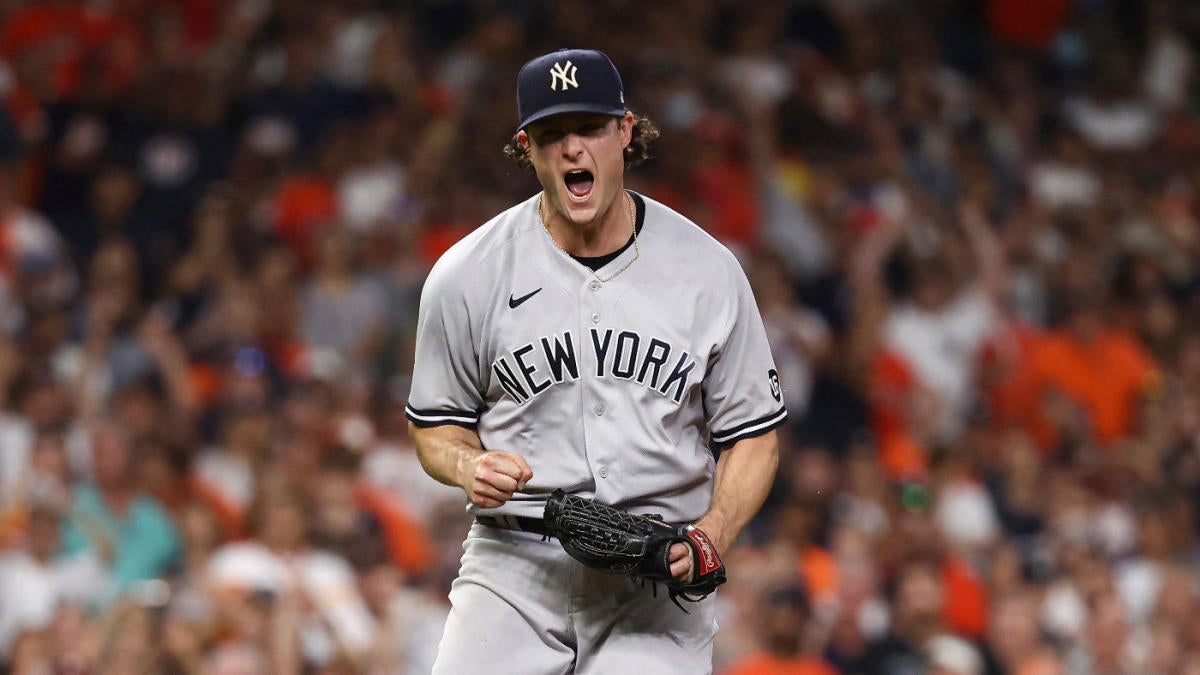 There is no love lost between these two clubs, who have been frequent postseason opponents in recent years. The Astros eliminated the Yankees in the 2015 AL Wild Card Game, the 2017 ALCS, and the 2019 ALCS. Yankees fans booed Houston relentlessly in response to the sign-stealing scandal when they visited New York in May.

Saturday’s game was a riveting pitcher’s duel and one of the most entertaining games of the 2021 season. The Yankees won the game 1-0 to clinch the series victory (box score). Here are four takeaways from Saturday’s game.

Aaron Judge drove in Saturday’s only run with a solo home run onto the train tracks in left field in the third inning, and as he rounded third base, and he made a tugging motion with his jersey that sure looked to be a reference to Jose Altuve not wanting to remove his jersey following his ALCS walk-off home run in 2019. Here’s the home run and Judge rounding third:

Yeah, it’s hard to look at that as anything other than Judge mocking Altuve. Judge played it cool after the game though, rather than admit his true intentions.

“Whenever they keep the roof closed here, it’s a little chilly. I was just telling my teammates to button up a little bit,” Judge told reporters, including MLB.com’s Bryan Hoch.

Fair or not, there has been speculation the Astros used buzzers to steal signs in 2019, and Altuve not wanting to remove his jersey following the ALCS walk-off home run has been cited as evidence. He has denied it vehemently, saying he was “too shy” to remove his jersey.

Many players around the league were outspoken after news of the sign-stealing scandal broke, including Judge. He said, “I just don’t think (their 2017 World Series title) holds any value. You cheated and you didn’t earn it,” when asked about it last spring training.

In MLB’s report detailing its investigation into the sign-stealing scandal, commissioner Rob Manfred said the league uncovered no evidence the Astros stole signs illegally in 2019. In the court of public opinion, Houston gets no benefit of the doubt, and clearly Judge (and surely other players) still feel wronged. Hard to blame them.

Judge finished second behind Altuve in the 2017 MVP voting. Saturday’s home run was his 21st this season. Judge took a .286/.377/.526 batting line into the game and was voted into the All-Star Game as a starting outfielder. Altuve and all other Astros have pulled out of the All-Star Game.

Cole was lights out

The last few weeks have not gone well for Gerrit Cole. Coincidentally or not, his performance has cratered since word got out MLB would crack down on foreign substances last month. Cole had a 1.78 ERA in 11 starts in April and May. In June and July, it was a 5.24 ERA in six starts going into Saturday, and his spin rates were down significantly.

On Saturday, April and May Cole showed up. He held the Astros, his former team, to three singles and two walks in the 1-0 complete game shutout. Cole struck out 12, his highest strikeout total in nine starts. Houston’s lineup is depleted with Alex Bregman and Carlos Correa injured, though Cole still had to del with Altuve, Michael Brantley, Yuli Gurriel, Yordan Alvarez, and others.

Cole threw a season-high 112 pitches through eight innings Saturday, but with Aroldis Chapman struggling and top setup men Chad Green (workload) and Jonathan Loaisiga (COVID list) unavailable, Yankees skipper Aaron Boone sent Cole back out for the ninth. When Altuve led off the inning with a single, it looked like things were about to go downhill for the Yankees.

Soon thereafter Boone went out to the mound to chat with his starter — Chapman was warming in the bullpen at the time — and Cole talked his skipper into leaving him in the game. The conversation was animated, to say the least.

“I said the F word a lot and then I just kind of blacked out. I don’t remember what I told him,” Boone told reporters, including MLB.com’s Bryan Hoch, about his conversation with Boone.

Following the Altuve single, Cole rebounded to get Brantley to fly out, and to strike out Gurriel and Alvarez to end the game. He threw 129 pitches — his final pitch was 99 mph — the most by any pitcher since former Astro Mike Fiers threw 131 pitches in his no-hitter on May 7, 2019. The 129 pitches are the most by a Yankee since Hall of Famer Randy Johnson threw 129 on July 19, 2006.

Following the game Boone revealed Cole was “under the weather and getting IVs” during the club’s previous series in Seattle, according to NJ.com’s Brendan Kuty. It was unclear whether Cole would even make Saturday’s start. Make the start he did, and it was a brilliant performance to give the Yankees a series win against a hated rival.

Greinke exited with an injury

If the loss and getting shut down by a former teammate wasn’t bad enough, the Astros also lost starter Zack Greinke to an injury. He exited the game after three innings and 65 pitches with right shoulder soreness, manager Dusky Baker told reporters, including Chandler Rome of the Houston Chronicle. It’s unclear whether he will go for any tests.

Greinke, now 37, took a league-leading 111 1/3 innings into Saturday’s game. He allowed Judge’s solo home run before exiting and the Yankees worked him hard, pushing him into several deep counts despite not breaking through with a big inning. The good news is the All-Star break is coming up, so the Astros can easily give Greinke extra rest without placing him on the injured list.

José Urquidy is currently on the injured list with a shoulder issue and of course Justin Verlander is rehabbing from Tommy John surgery. Should Greinke miss time, Houston would likely return righty Cristian Javier to the rotation. Javier recently moved into the bullpen and threw three scoreless innings Saturday night.

The Astros were shut out again

Despite that, the Yankees have shut Houston out in the first two games of their weekend series, holding them to six hits total in the two games. It is the first time the Astros have been shut out in back-to-back games since May 1-2, 2018, also against the Yankees. Several Astros hitters were riding long 0-fors in the middle innings.

There’s no shame in getting shut down by Cole the way he was throwing Saturday, plus Bregman and Correa are injured, so the Astros don’t have their full lineup at the moment. They’re way too good for this offensive malaise to continue, however. The Yankees have pitched them well the last two days and credit to them. Houston will take it out on some poor team soon enough, maybe even the Yankees on Sunday. They’re too good to keep down too long.